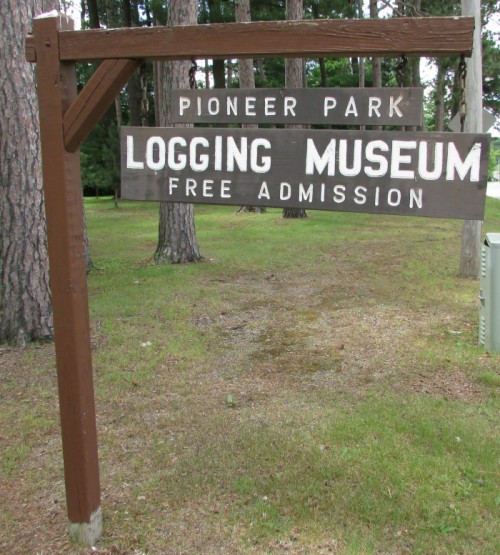 There is much to see in Rhinelander and this museum is a must-see if you only have one day.

The Pioneer Park Museum Complex is America’s oldest Logging Museum and was once an actual logging camp. It is only open from Memorial Day to Labor Day, closed Mondays except for open and end of the season.  During September, open Fridays and Saturdays.

This is a self-guided tour, and upon arrival you are greeted by a docent and given a sheet describing each building and exhibit in order so you don’t miss anything. Page 1 and following exhibits. 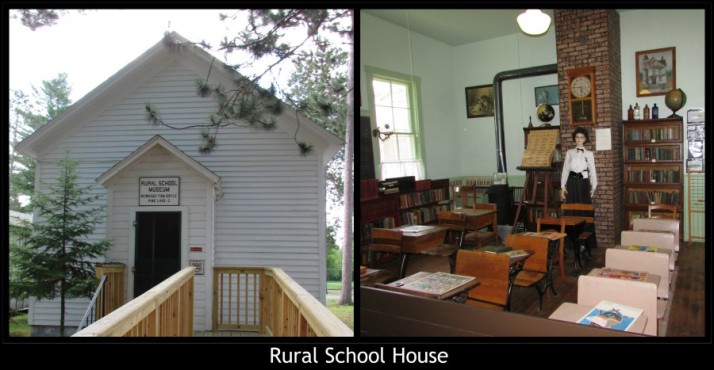 The Civilian Conservation Corps provided jobs during the Depression in the 1930’s.  It also helped build the infrastructure of the National and State Parks throughout our country.

The Fire Barn had a beautiful mural painted on two sides.

Three trucks on the inside.

There was a teepee outside of the Fire Barn too. Here we are for scale. 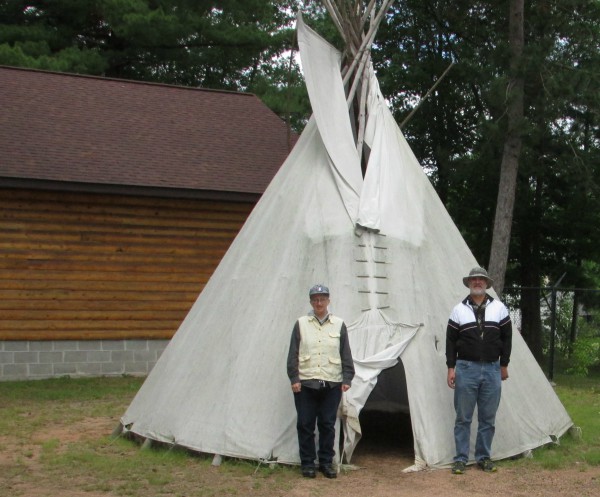 Now we head to the Blacksmith Shop, very interesting! when you walk in they have a cross section of Wisconsin trees at the Nicolet National Forest on display. 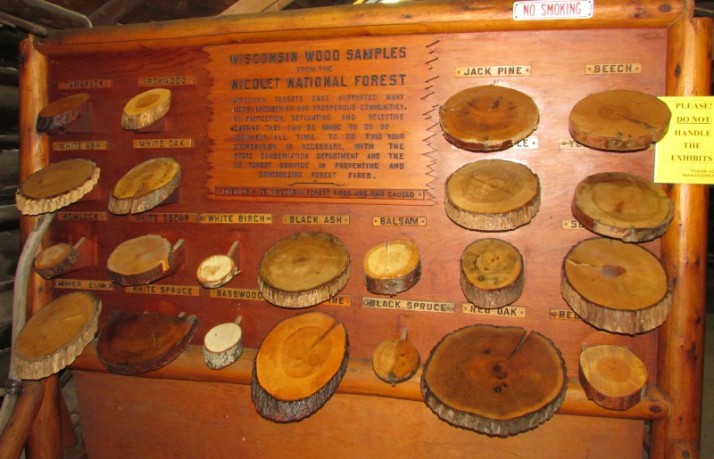 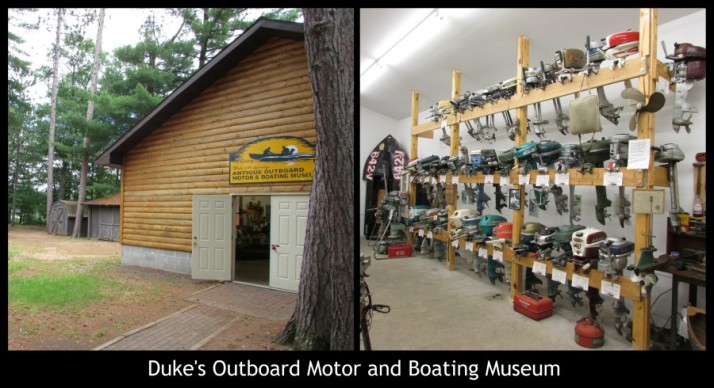 In the main building are many treasures to be seen, some of them animated. We first see a logging camp setup for their dining room. 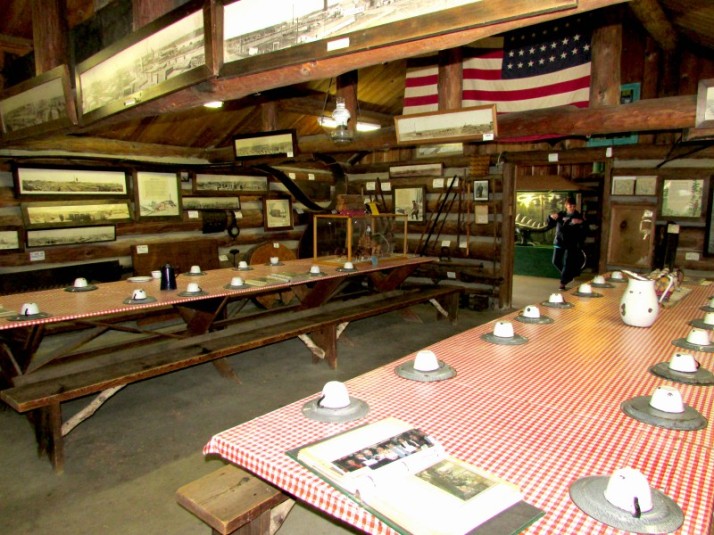 As you can see up ahead, this is the door leading to the “captured” Hodag. Also a Hodag “roar” and a mini-sawmill model with moving figures inside. Also Hodag art.

I just heard the roar from the Hodag on the left. A docent at the museum will press a button to play  the roar.

The Model Sawmill is amazing, its 75 years old! It used to run on steam, now its electric.  Here is some information about the builder. Lets see it in action!

This concludes Part 1 of the museum, the half on the right side of the complex.

On the left side are all the railroad cars, the Rhinelander Depot and other artifacts of interest.  Click on pages to expand.

First off is the Steam Hauler, which used to pull logs on a sleigh with ease. It helped cut down the cost of logging and wear and tear on horses!

The Rhinelander Railroad Association has been involved here, and a fine job they have done! They also have a model railroad in the basement level of the depot. I hear the train now! This is simulated, the train is really stationary and does not give rides.

If you want to ride a real steam train, you need to go to Laona to ride their Lumberjack Steam Train.  Its about 45 minutes west of Rhinelander.

The #5 Engine is still in the process of being restored.  The caboose has been completely restored by the Northwoods Woodworking Club.

We enjoyed getting the grand tour of the displays by a volunteer from RRA.  He first showed us the model railroad, filling the entire room. How impressive!

There were many good displays on the top floor too, even a train stained glass window. 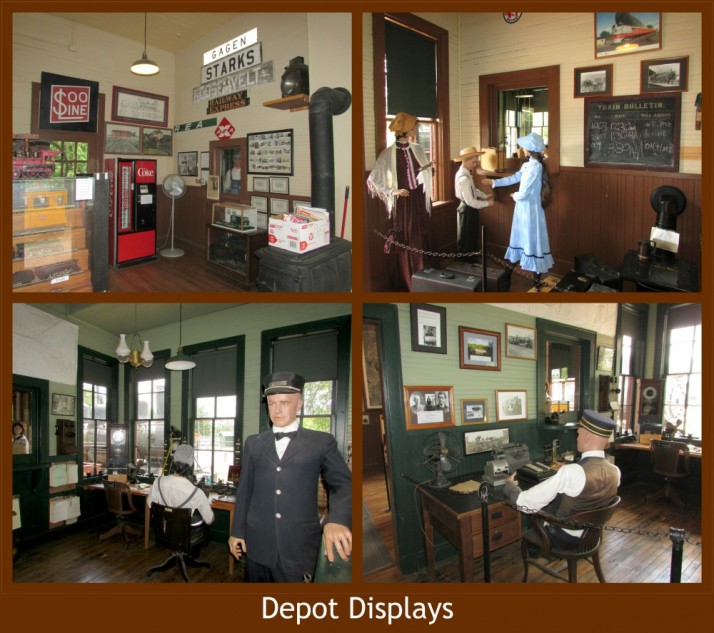 And the grand finalé, we recieved a tour of the car currently off limits to visitors, the “Thunder Lake Company Car”, or President’s Car. Our guide showed us the work still had to be done here, and the need for donations. $10,000 is the goal and there is still a LONG way to go. While you are there you can either put money in the donation box or send a check here.  Interior of car and restoration photos exclusive here. 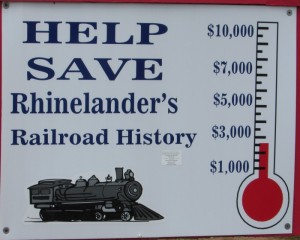 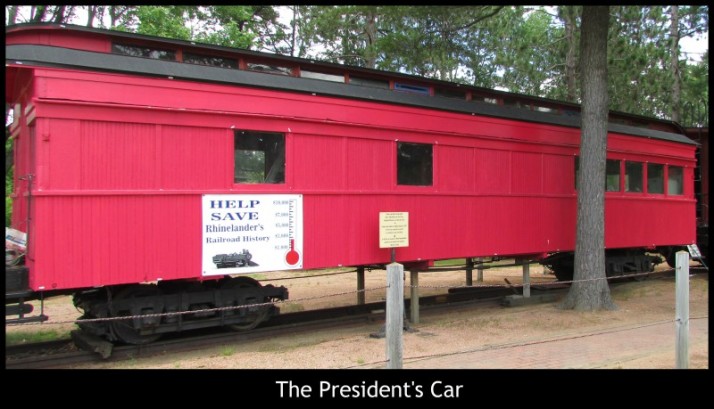 Thanks very much for showing us so much, you take pride in your work and it shows.  Now to wrap up our tour. here are a few more exhibits.  It was an enjoyable 2 1/2 hours of exploring and we learned a lot! 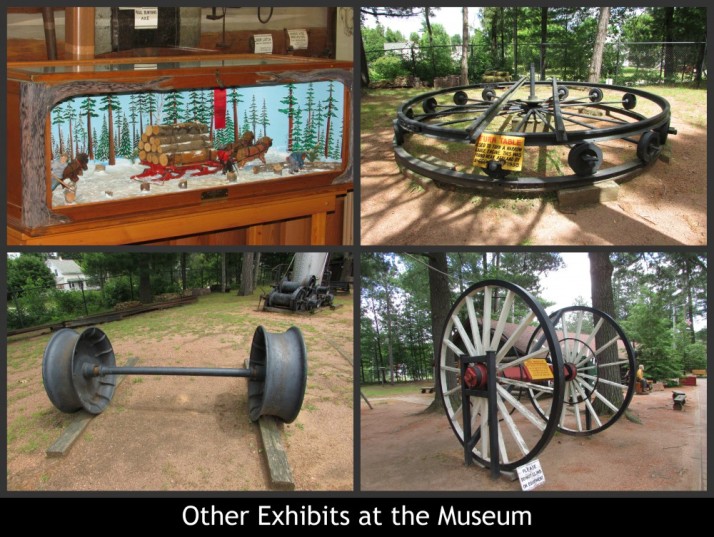 Near the entry take a picture with the hodag and/or a carving of Tom Skubal, a former CCC participant.

A great time to be had by people of all ages here, especially railroad enthusiasts.  Around the Corner With John McGivern was here in 2014.