This live radio show is cancelled as of July of 2016 by WPR and not by Michael Feldman.

6-8-16  A Kickstarter fund has been created to keep the show going via podcast form.  . Open through July 7.

7-8  The Kickstarter was successful. The program will come back in podcast form in the fall.

In February of 2016 that Madison’s long running live radio program  “Michael Feldman’s Whad’Ya Know?” was on the chopping block. I knew we had to get there in person and see it before it was gone forever.  I bought my tickets  ($10 each) two weeks earlier and they were sold out in 3 days!

The show has taken place at the Monona Terrace over 10 years. I took this picture of the set during my tour of the building in September 2010.  It looked almost identical  6 years later.

We arrived at the Monona Terrace, the crowd was just entering the auditorium to pick their seats.  This sign was in the lobby.

We quickly found seats in the middle, it was more than half full already.  Here is the stage before the show began, it has changed little in 6 years. Michael came out on stage to coach the audience and give us studio protocol.

A cute wagon on the stage under the town of the week map. 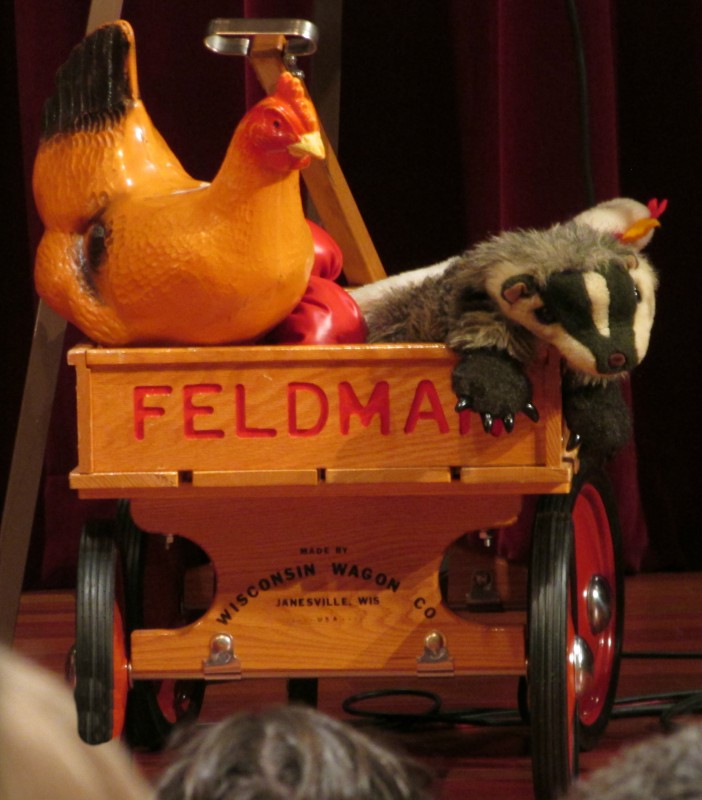 The show begins, he prompts us with “Whad’Ya Know?”  We respond with, “Not much, you?”  The music begins, with introductions of guests and show features. Co-host Stephanie on the right side of the stage read these acknowledgements. 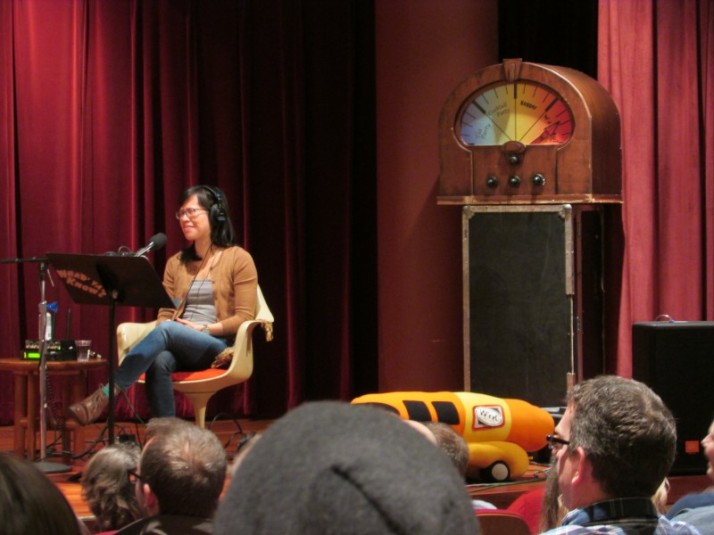 The show begins with the”All The News That Isn’t” segment, the week’s news with a humorous twist.  The segment closed with the story of the new Bucks Stadium proposed design, he said Guinness called it the world’s largest pastrami on pumpernickel (podcast-10:50).

The show continues with a phoned-in interview with author Bill Bryson discussing his new book, “The Road to Little Dribbling”.  It sounded like a funny book, need to give it a read! 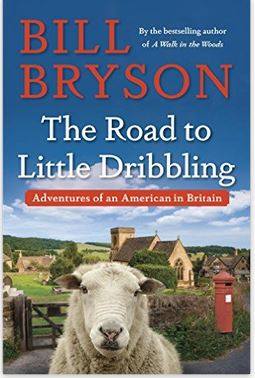 Another feature of the show is the Whad’Ya Know” Quiz. Michael pits someone from the audience with a caller to the show to answer three trivia questions, the players pick the categories.   They do this in both the first and 2nd hour of the show.

Before the beginning of the show, audience members also have the opportunity to submit questions to Michael. During the 2nd hour, he left the stage and circulated through the audience to answer their questions. He also picked people at random to talk to.  We must have picked good seats because he came over and talked to Al! Listen to Al discuss fishing with Michael on the podcast 1:29.41 to 1:30.33. 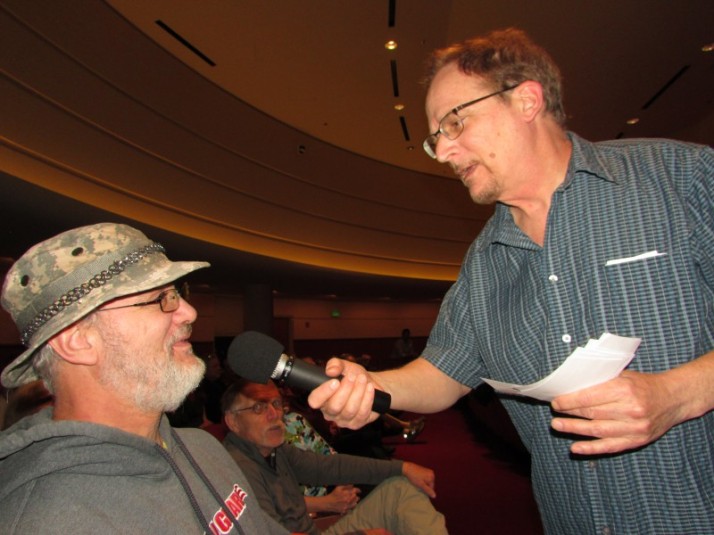 Closing out the program is the “Town of the Week” segment. The week before a dart is thrown at a cut-up US map and where it lands will be the town discussed the next week. They also call someone who lives there to get a local take on their own. This week the town was Edenton, North Carolina. 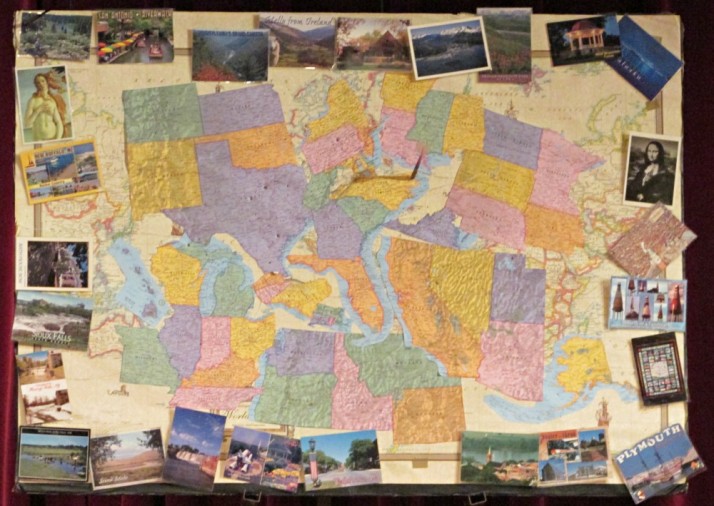 A very interesting and historic community.  After the segment Michael chose a boy named John, age 10 from the audience to throw the dart to determine the next town of the week (1:20). Turns out he has lived in North Carolina, though not Edenton. The new town turned out to be  Pine City, Missouri.

The show concludes with a happy audience and memories created, especially since Al finally got to use his broadcasting degree on the radio.  Listen to the whole podcast here. We are very glad we made it to the show today.

Ride the Drive has been a popular event in Madison since August 30,2009.  That was the first one and Madison loved it!  It was inspired by the Ciclovia in Bogota, Colombia. They close some city streets for people to ride their bicycle,  roller skate and use all forms of travel and build a festival around it. In recent years, they have the first one downtown, part of the route going under the Monona Terrace.  People can then look closely at the mural that is under there.  The 2nd one is now in August, rotating to different parts of town.

Let’s first look at scenes from the June event, the best attended one.  Some funny bikes too, here is a bowling bike. Also a TINY bike. 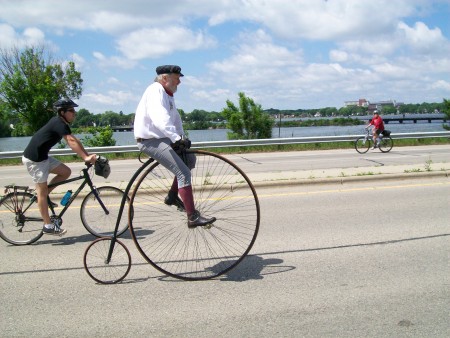 And the best bike of all, The Capitol Pedaler!

Even a performance by The Greasy Gears!

We continue on to Olin Park, which has a great view of the Madison skyline by Lake Monona and another activity stop. We saw a cool homemade vehicle made by some young guys, cool! I don’t see any pedals on it 🙂

All that riding made us hungry so we had lunch at this cute burger truck on the right, the Slide Food Cart. Great food!  We enjoyed a slider with homemade potato chips, which tasted real great.  For those of you watching your sodium, they are made unsalted!  The also cater and are on Facebook.

The fun continues down John Nolan Drive, we head toward the Capitol, going under the Monona Terrace.  So much fun! And a final row of booths. 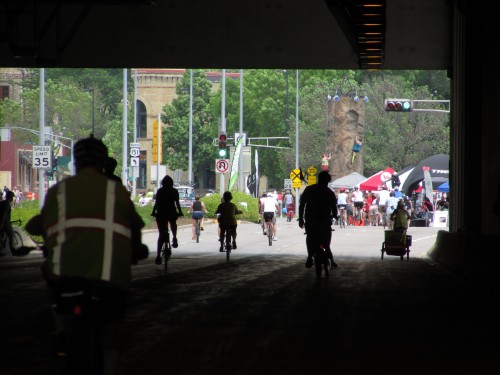 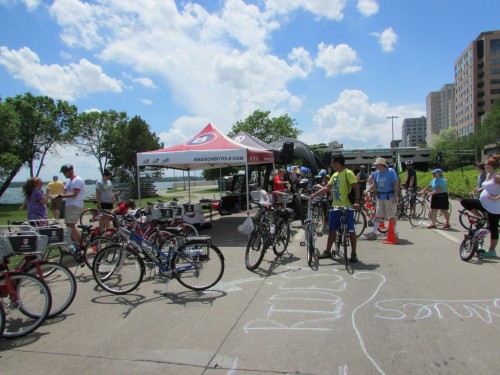 I like this rainbow B-Cycle bike 🙂 The have stations all over Madison to rent a bike.

Up at the Capitol there are more booths and in the past live music. 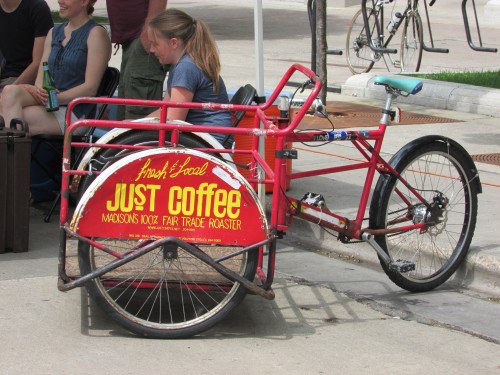 This is where we live!  It was so much fun having ride the drive in our own neighborhood.  This is also the first time we got to ride the Capitol Pedaler. We paid only $5 and got a great ride,  plus some pizza and treats to eat!

They took our picture before we got started. I am the 4th on the left, Al is in the far back seat. 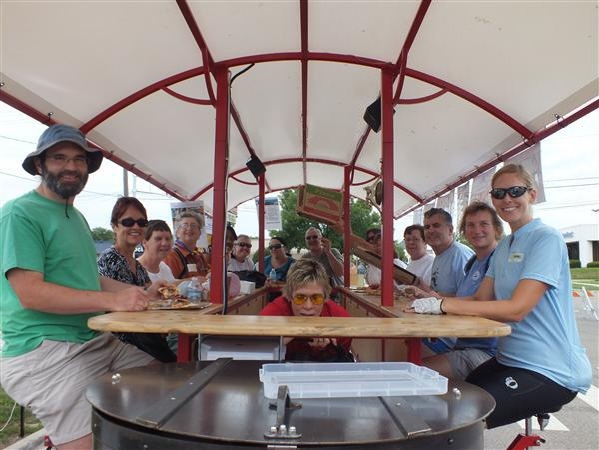 What a great time, and we cheered and waved at people going by. We even sang to the mp3 player they had on board.

Last year there was a West Side ride but we couldn’t make it. This year the 2nd ride was on the Eastside of Madison. It was a short 2-mile loop that we rode twice. As we approached Fair Oaks, we were serenaded by the Bird Band.

There were two fun stops on the route, Olbrich Park Village and a sandwich board listing all the activities.

The other stop was at O.B. Sherry Park, one we have not been to before.

Ride the Drive is such a good time, come if you can. Its fun for the whole family!

The holidays were in full swing in downtown Madison, and we wanted to be a part of it. Our first stop was the Monona Terrace for the Winter Farmers Market. Winter doesn’t stop Madison from having its weekly market, they just go inside 🙂

After getting a treat here we headed to the State Capitol for a Christmas concert by Sandy La Clair Musical Productions.  They played all the holiday favorites and the kids attending even played instruments. This little girl was adorable playing the triangle.

The centerpiece of the show is the Christmas tree in the center of the Rotunda.

After lunch we were done for the day.  During this time of year,  a free trolley goes up and down State Street to make shopping easier.

We sure had a great day downtown celebrating the holiday season. Come join in the fun!

The Monona Terrace was completed in 1997 after MANY years of the city debating whether to build it or not. It was originally proposed in 1938. They finally did, but at the expense of the mural that is at street level going under the building.  The building is based on a Frank Lloyd Wright design.   The tour began at 1:00, and I was the only person that day. It began at the gift shop. In 2015 it is $5 for a tour.

We went down to the large room where the indoor winter farmers market is held, along with other large events. Here is the room on a different day with an event going on. Its huge! 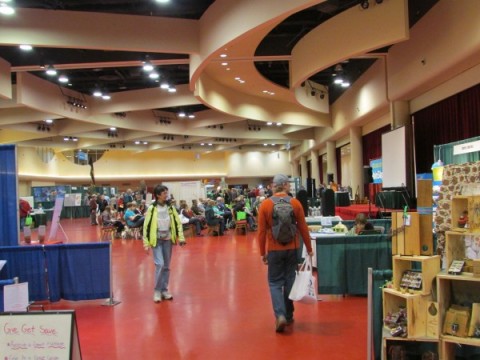 My guide showed me the Ballroom, appearing even larger due to it being currently empty.

The large windows are part of a room often used for wedding receptions. This one is on the lower level.

The upper level houses a similar room, but larger.

I also saw the auditorium where the radio show, “Whad’ Ya Know?” is broadcast LIVE on Saturdays. 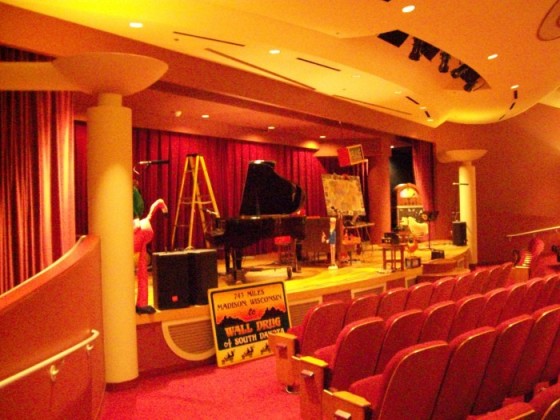 We ended the tour on top of the huge patio overlooking Lake Monona. You can have lunch at the Grandview Cafe, open during the warmer months. 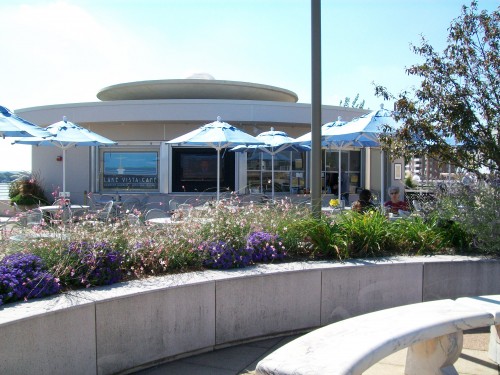 I had a very enjoyable tour of both the Capitol and the Monona Terrace that day.