McFarland has  a very active Historical Society, and now owns two museums dedicated the history of the village.  The newest one, the Larson House, we visited on July 13 of 2014. This is the older one. The McFarland State Bank donated the lot that the museum was built on in 1971. It is located on 5814 Main Street, not far from the Larson House. Hours are Sundays from 1-4 PM, Memorial Day through September and by appointment. The museum hosts two events, the Memorial Day Bake Sale and Pioneer Days in the 3rd Sunday in September.

This is the main museum building which we toured first.  Exhibits consist of items donated by past and current residents of the village.  The first displays you see are from  1964, when the McFarland Historic Society was granted it’s charter to aid in the development of the museum.

Many of the early residents of McFarland came from Norway, and many artifacts reflect that.

The Norwegian instrument Psalmodikon was also on display, a simple string instrument.

Also a display of McFarland residents’ service in the Armed Forces.

The railroad was how McFarland came to be, the track is still active even now, though just for freight trains.  It goes right by the McFarland House, former home of William McFarland, founder of the village.

Here is a family photo taken outside of the house of William McFarland and his family. 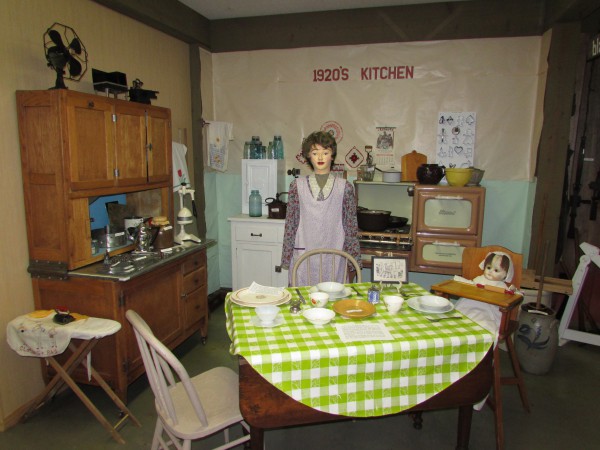 Just beyond the kitchen is a Blacksmith Shop and woodworker tool display.

And the General Store. 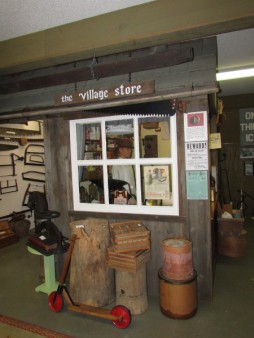 Don’t forget a toy for the kids!

During the winter, McFarland residents harvested ice off of Lake Waubesa and some loaded onto the train to be used elsewhere. 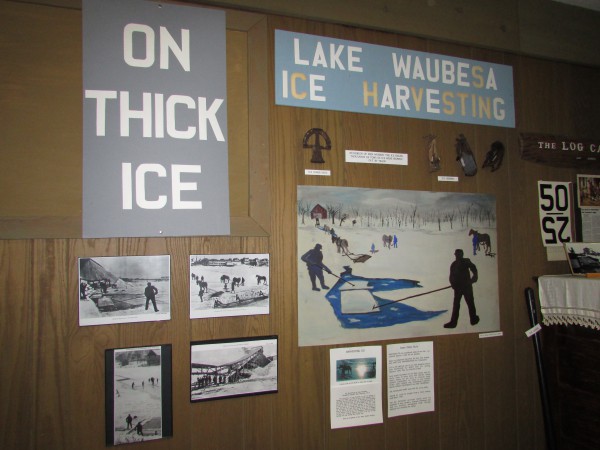 In the summer, recreation on the lake abounded. Lots of boating, swimming, and fishing. Some people had cabins on the lake they might live elsewhere during the rest of the year.

Shoemaker Shop exhibit. Shoes were custom-made for everyone a long time ago. 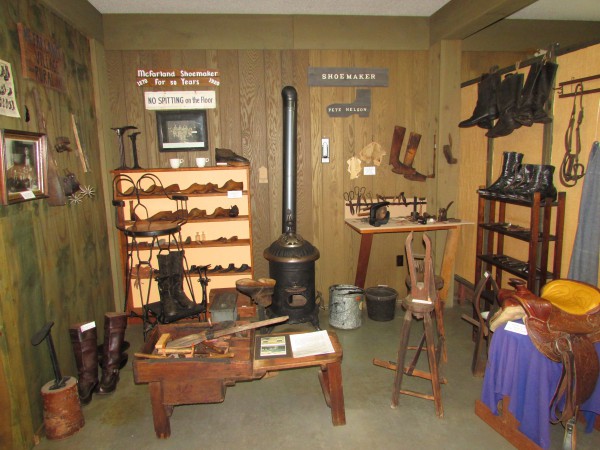 Displays of a typical bedroom in the 1800’s.

And a Norwegian-style kitchen with native equipment.

The historic society also honors the first settlers of the area, the Native Americans 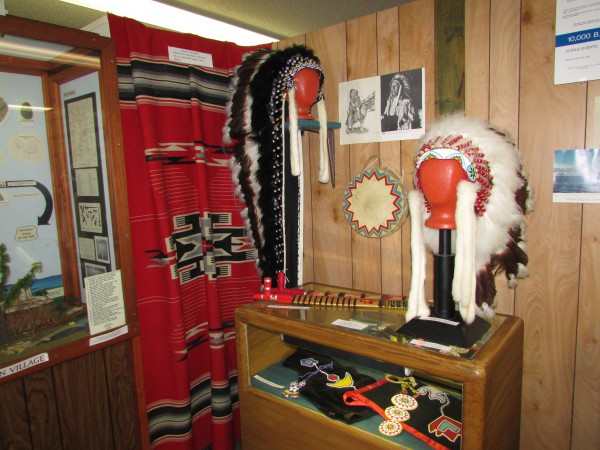 That takes us through the first building of our tour, there are two others behind this one.

Our next exhibit, the historic Skare Cabin. It was originally located at Hidden Valley Farm off Elvehjem Road. It was donated by Albert’s niece Margaret Greene Kennedy in 1969 and it was dismantled and moved to the new Museum lot in 1973 and rebuilt. 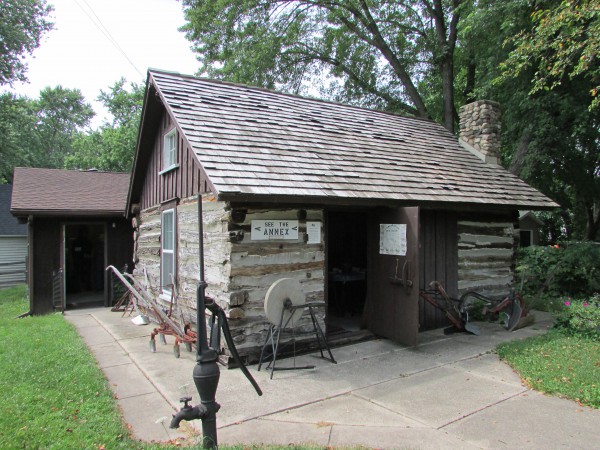 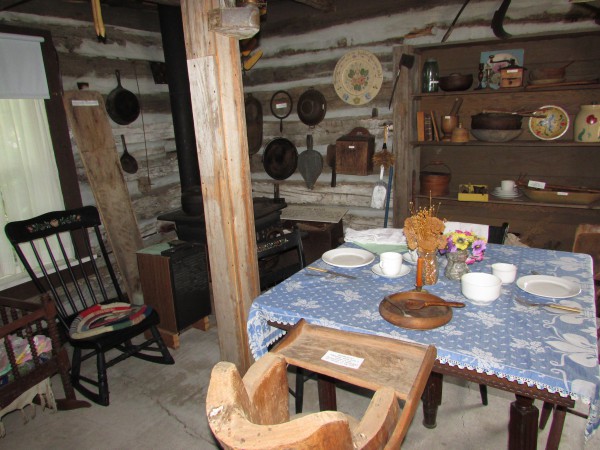 The high chair was carved from a large log! 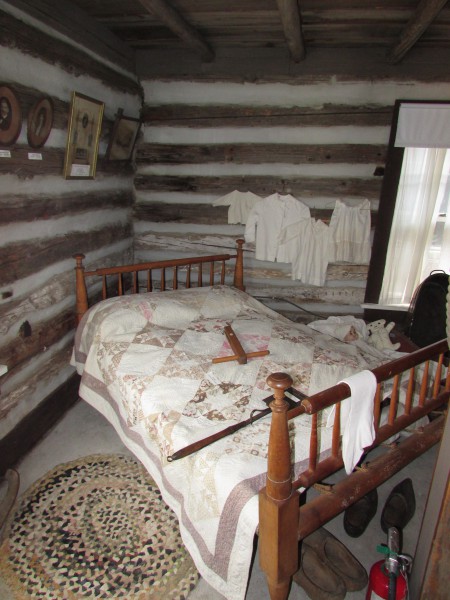 Bed in one corner, a loft upstairs for the other kids.  There were 11 people living in this cabin before the Skare family moved into a larger house in 1887 200 feet from this cabin. 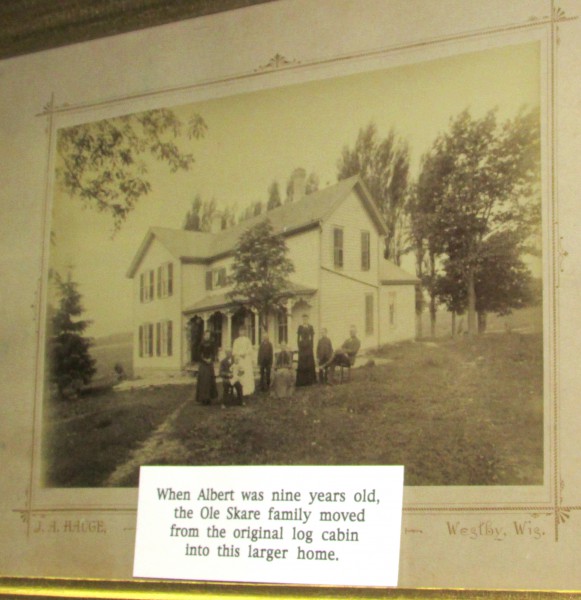 One more building left to see behind us, The Annex. This building houses the agriculture exhibits. 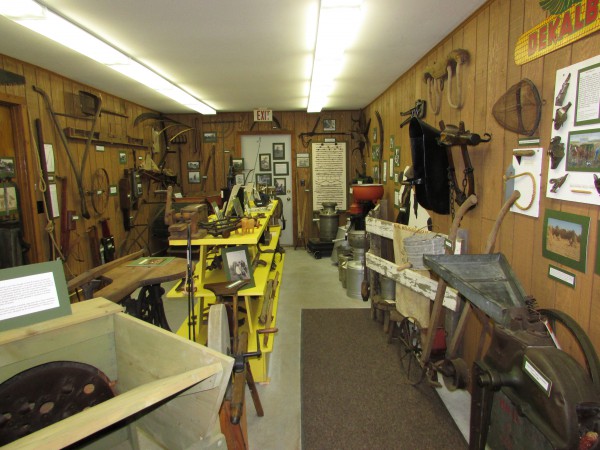 This pretty much wraps up our tour of the McFarland Museum.  We were surprised McFarland has so to see and do.  Get off the beaten path of the “new downtown” and visit the old downtown of McFarland. The had some items or sale as well, I got the Historic Mcfarland Walking tour booklet to easily find the other points of interest.

McFarland is worth a closer look, we are sure glad we did! 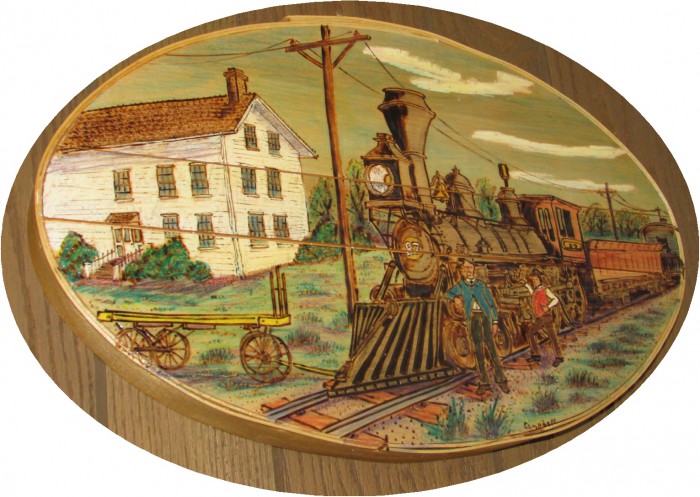 A long time was spent restoring the Larson House in McFarland, and last fall there was a sneak preview of progress made up to that point. The grand opening was May 24-25th of this year.

John Larson was the 3rd owner of this house. He bought it in 1911 and has been in the family over 100 years. Now it is open and ready for tours from 1-4 PM between Memorial and Labor Day. Tours are free but donations encouraged, a few books about the house and McFarland history are also for sale.

We begin our tour as we go inside, we see the beautiful stained glass window you see here at the stairway landing. 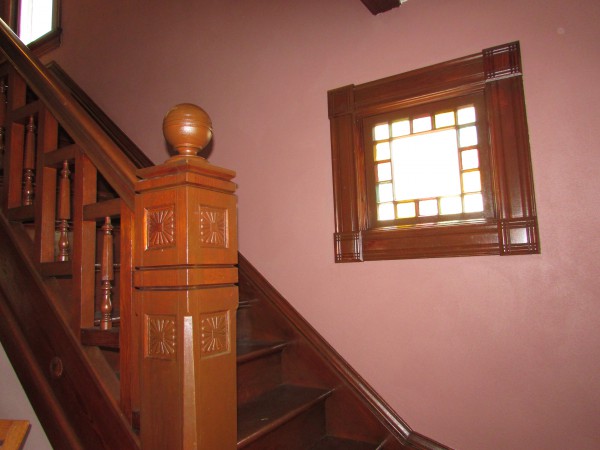 On the main floor is also the living room (picture by Larson House staff) and the kitchen. 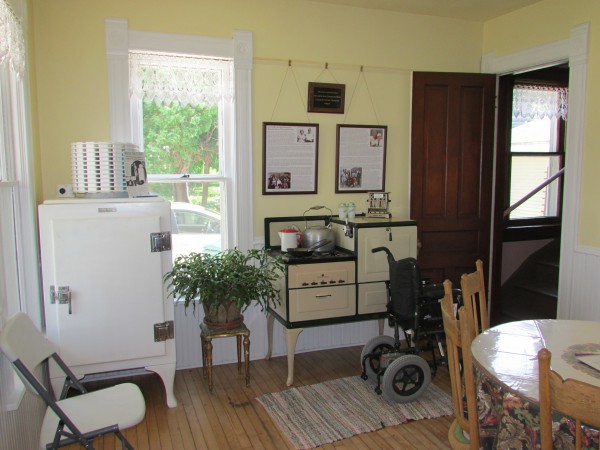 Pantry in the kitchen 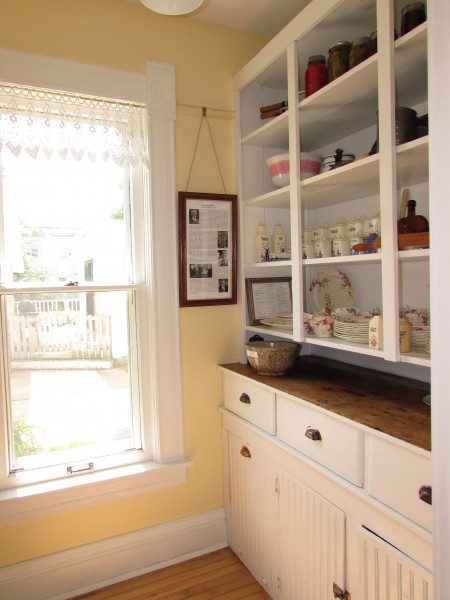 Also the Parlor and Dining Room.  The wallpaper is original to the home!

On the left side of the room is John Larson’s Psalmodikon instrument from Norway, his homeland. Here is what is sounds like. It is a one-string instrument that can be either plucked or played with a violin bow.

Now we head upstairs to see the other rooms.

The largest is what may have been the master bedroom, and it is octagon-shaped, a popular feature at the time. Hanging up is a Norwegian dress. The three windows are facing the street.

Another bedroom. The bureau and mirror are original to the house. 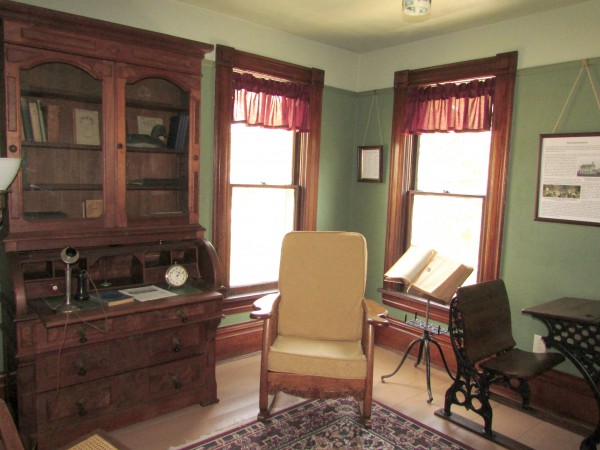 Our tour here has reached it’s conclusion. We really enjoyed our visit here and we hope to come for any special events here in the future.

McFarland is a village of 7800 just 8 miles south of Madison along the shore of Lake Waubesa.  It was founded by  William McFarland in 1856. We have been here many times, but never really explored this town in depth.

Before reaching downtown, exit 51 at Sigglekow Rd. for a great meal at the Green Lantern, a popular restaurant on Lake Waubesa for decades. You can even get there by water and dock on their long pier!

One thing we noticed is this town has an “old” and “new” downtown.  The new is along highway 51, straight down from Madison.

To my left is the Maple Tree Supper Club, open for breakfast on Sundays also.

Across from here is the popular Babcock Park and campground. A historical marker is also in this park, for Stephen Babcock. 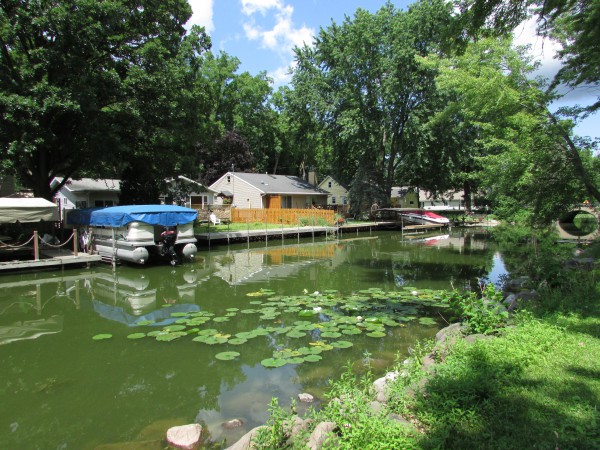 Highway 51 is also a Blue Star Memorial Highway, dedicated to all vets.

The “old” downtown is on Main Street, by the railroad track.  Here we find the historic buildings and a brief history of McFarland.

We were going to have lunch here. Since they were closed, we went next door to Byrne’s McFarland Tavern. This historic building was built in 1895 and began as a convenience store and has even been a post office before becoming a tavern.  Friendly folks and great food made us feel welcome here. You feel like you are a part of historic McFarland.

Another historic building across the street, the Ole S. Olson building from 1897. It was a convenience store and then a grocer later. Now it is McFarland Antiques. 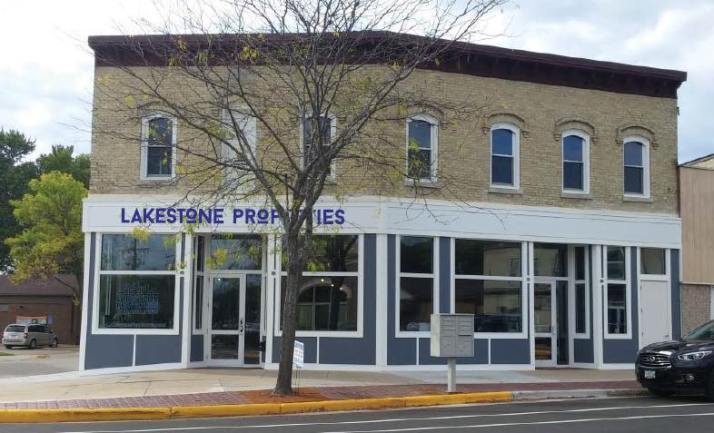 Across the street is the Ed Reed Building from 1900. It had been a grocery store, meat market, and has been Spartan Pizza since 1974!

Now the most exciting reason for our visit, the historic John Larson House Museum, open for the first time after restoration this summer! They are open 1-4 on Sundays from Memorial Day weekend through Labor Day weekend. This is a stained glass window inside the house at the stairway landing. We took a tour here and it was fascinating! We hope to come back for any special events they will have later in the year.

Across from the house is Arnold Larson Park, where many events are held in the summer.

We sure learned a lot in McFarland, but we are not through yet. We plan on returning August 10 to see their other museum, also open on Sundays. We only had time to see one today.