At long last, we finally had the opportunity to take this tour in Genesee Depot.  Only children 12 and over are permitted to take the tour due to the estate’s fragility. This tour  normally is $35 a person, but was free May 29 & 30 because of a special event taking place. The Greater Milwaukee Foundation (GMF) gave a gift to visitors (and residents) to the Milwaukee area and free admission was granted to three venues in the Milwaukee Metro area. We have known about Ten Chimneys and we had to take advantage of this rare opportunity. Thanks GMF!

This is the former estate of Alfred Lunt and Lynn Fontanne,  actors who married and decided to live here during their off months (summers) of performing in movies and plays.  When they retired they lived here full-time. You wouldn’t think a tiny community in Wisconsin would attract stars of stage and screen, but it did in this case since Alfred grew up in Wisconsin.  Genesee Depot turned out to be the perfect setting for this peaceful home for the Lunts.  After restoration, it was opened to the public in 2003 for tours.We meet first in the Visitor Center to check in and we begin our tour promptly at 9.

Our tour docents are Annette and Myron Olson, who really brought to life the lives of the Lunts for us, and their personalities. You felt like you knew the Lunts after this tour! Here is a map of the estate (click to enlarge). 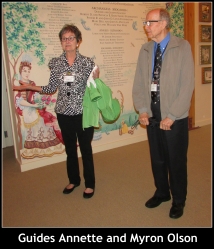 We began  by watching a short film introducing us to the Lunts, which you can see here.

The shuttle bus is arriving to take us on our tour, it lasts two hours and photography is only permitted of the outside, not inside. The tour is on a tight schedule and you can’t wander off by yourself to take pictures. You have to move fast!

We begin at the Main House, a marker is just outside of the driveway. We spent an hour here, there were many rooms to see!

We were amazed at the art and beauty here, preserved just as it was when the Lunts were alive. The kitchen was a delight, Alfred had taken a 6-week culinary course at Le Cordon Bleu in France and cooked for the both of them (Lynn didn’t cook). We saw their main dining room, their bedroom and guest rooms.  Annette and Myron really knew their stuff, you felt like they knew the Lunts personally!

After the main house we walked on the path to the Studio, also saw the Greenhouse from the outside. They also recently acquired chickens, Alfred also had them when they lived here. In fact, he grew most of their own food in the garden so they were getting produce as local as you can get!  We also visited his kitchen (and took our only sit-down break there) and we were told he even created his own recipes which were then compiled into a cookbook. We could get it in the gift shop too!

A couple of the out buildings near the Studio.

On the path to the Cottage  you could see the Poolhouse and pool, which is still filled each summer for special events. It has been a cool spring so it wasn’t filled yet.

My favorite building, the Cottage. Painted in my favorite color red, it was just as delightful on the inside. 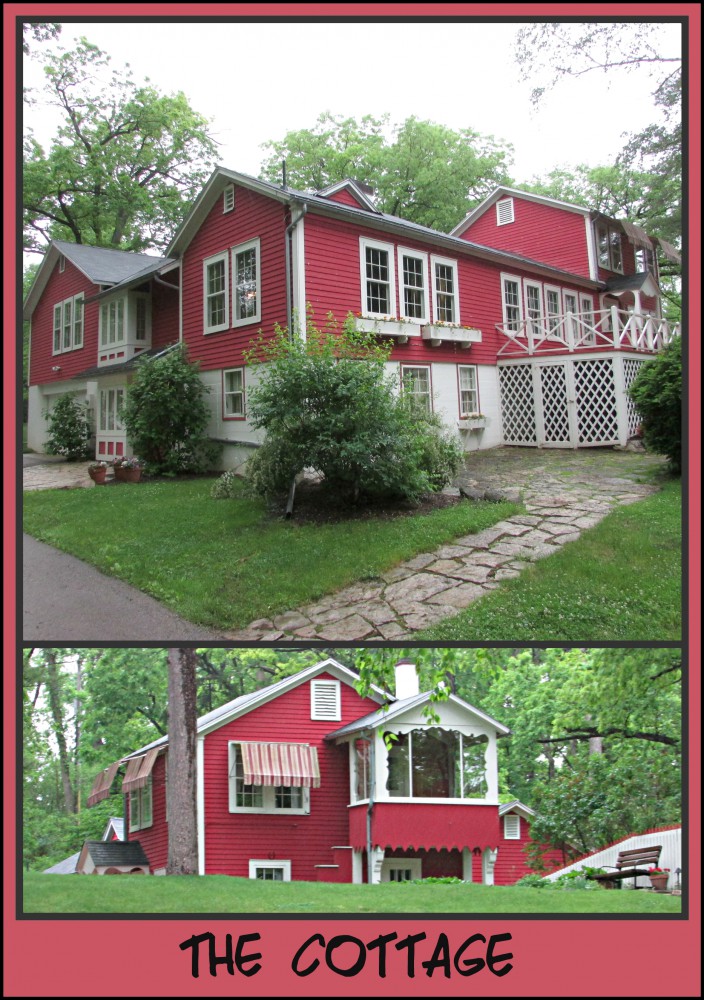 The tour was coming to an end and we shuttled back to the visitor center to see the displays. We were on the first tour at 9 AM, they were taking groups of 12 out every 15 minutes, it was a “sold-out” event both days.  Since this was a big celebration, it came complete with cake to celebrate! A lady from the GMF was there serving it to the visitors, thank you!

Now for the many beautiful displays, many interactive.  This is a re-creation of the Lunt-Fontanne Theater in New York City, opened in 1948.

The view right inside, a stage and audio players to hear excerpts from their many plays.

There were also “Toy Theaters” depicting scenes from 5 of the Lunt’s plays and their single movie, The Guardsman . Alfred built them, his skills were immense. Very interesting!  Tinsel prints go back to the early 1800’s, and the Lunts did collect some as part of their art collection. 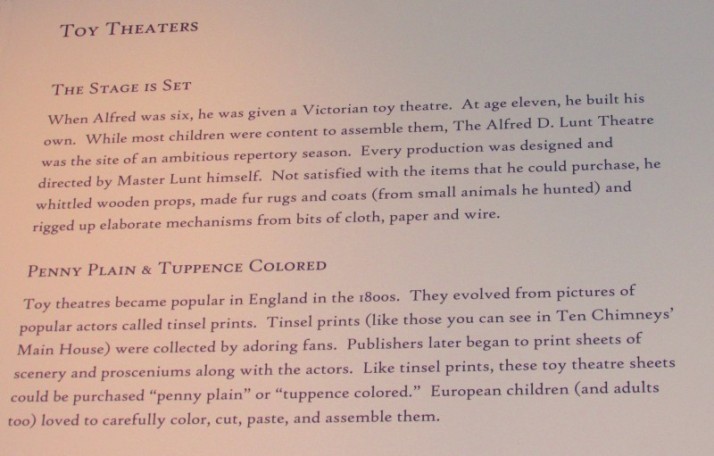 There were 6 toy theaters displayed, all but one were working. The Guardsman was the only movie the Lunts performed in, released in 1931. 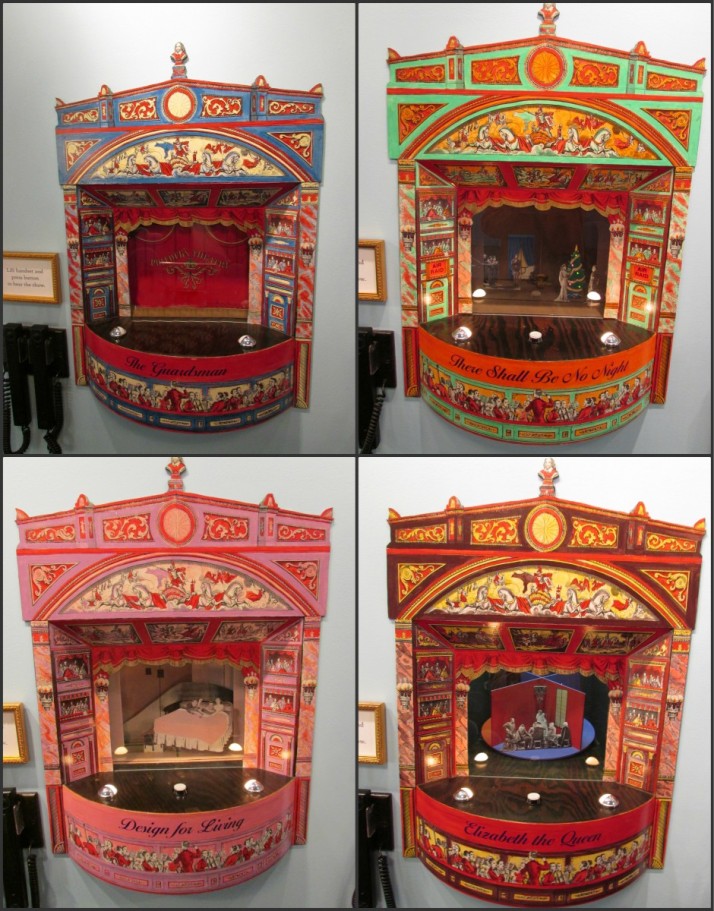 Be sure to stop in the gift shop, we got a tour flip book and postcards. Many books were there too, including the cookbook assembled from Alfred’s recipes. Since I am a cook, you can be sure I bought this too 🙂

We recommend this tour to anyone who appreciates history and theater.  We really had a great time!