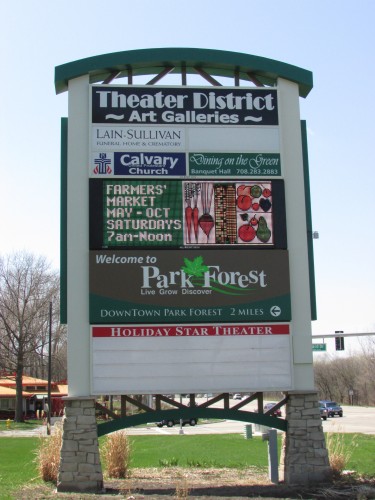 Park Forest is my hometown, I grew up here.   My family was here from 1966 (birth) to 1984 and it was a great place to grow up.  It was interesting seeing the changes 30 years after moving to Wisconsin. Park Forest is famous for being the first planned community after WWII.  An early nickname for Park Forest was “GI Town”.  Park Forest was built to address the lack of housing for all the returning vets of the the war. The village  was  ready for residents by 1948.  Enjoy this video showing the early history of Park Forest.

Let’s begin our tour of my hometown, right here with the sign at the edge of town at the intersection of Lincoln Highway and Orchard St.  Right across the street from here is another childhood memory of mine, this little structure at the edge of Olympia Fields, for a gated community called Maynegaite Woods.  When I was little I called this a “little castle” and always wanted to go inside. 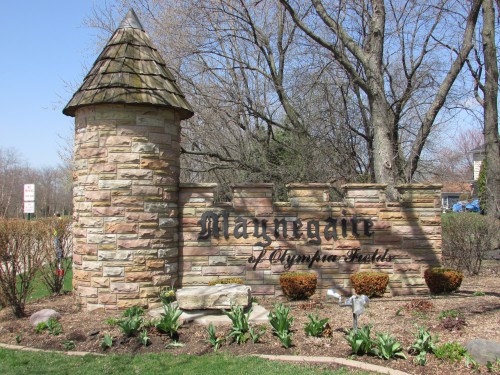 The Chinese house across the street.

We move further down Orchard, on our left is the building where the fire dept.  practice putting out fires.  I knew it as the Jaycee’s Haunted House, where we  went to get scared near Halloween. It is dedicated to Captain Adolph Pfeifer, who  died in the line of duty in 1963.

On our right is the Aqua Center, the outdoor pool complex where I learned how to swim.  They were getting it ready for summer.  This pool used to have a high dive.

Next to the Aqua Center is the Park Forest Public Library, where I spent MANY hours all the way through high school.  We had arranged a tour with the Library Director Barbara Osuch, to show us around.  She is very gracious and an asset to a place that was so important in my life.  I was especially impressed by the children’s area, completely revamped and modernized.   One theme has persisted over the years, kites.  When I was 12,  they had a  summer work shop on making kites out of plastic garbage bags and wooden dowels.  We made the kites, then went out to Central Park just outside of the library to fly them. 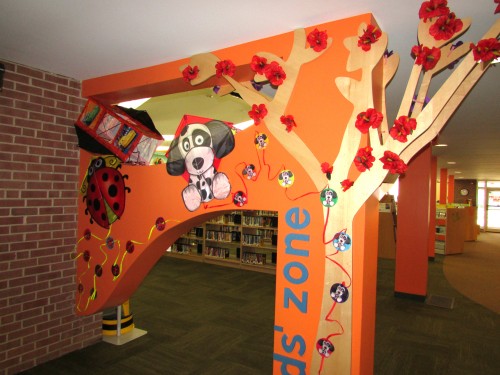 The view outside these windows facing Orchard USED to be my school, Lakewood. I was a student there from 4th-6th grade.  Here is a picture I took of the school in  1993  before it was torn down to make room for housing. Thanks for the great tour Barbara! 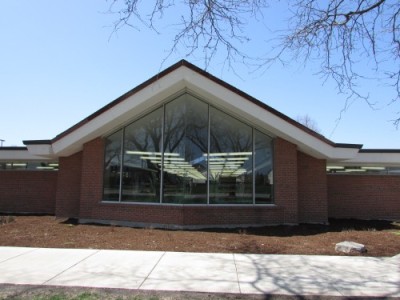 Back behind the library is the Freedom Hall/Nathan Manilow Theatre, named after one of my town’s founders.  I have attended and even have performed there when I was a kid, tap dance recitals.  It opened in 1976 when I was 10.

Park Forest does not have as many restaurants as it used to have, but this red brick building on Orchard has housed a restaurant as long as I can remember. It has been Dunagains Irish Pub since 2013. 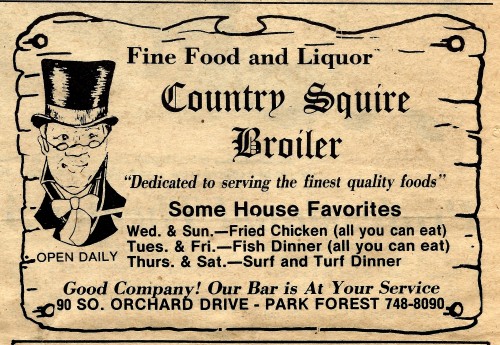 The current business is still owned by the same family but has changed with the times.  They also still serve great food,  we found that out by having lunch there. I had soft tacos and Al had a Reuben.   Friendly staff  made us feel welcome and we would recommend coming here. They also have live music on some evenings.

No longer hungry, we continued our tour.  We got to the corner of Orchard and Indianwood, where my childhood Catholic Church resides called St. Irenaeus.  Some of my best memories are here, in the CCD religious program, and helping out at our summer day camp for two weeks every summer during high school.  It was just as beautiful inside, with distinctive stained glass windows.  We attended a Sunday service there in Oct. 2003 during our last visit.  Following are pictures from then. 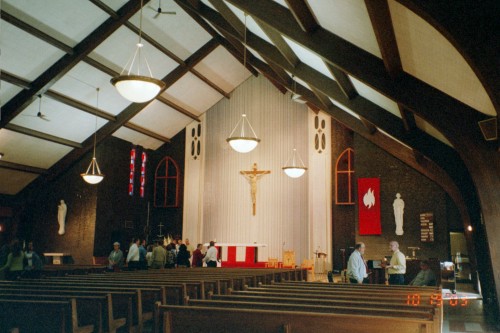 Just past the church on Indianwood  on our right is the bank and post office.  It was “The Bank of Park Forest” when I lived there. We sometimes sold Girl Scout cookies there in the post office. Drive-through on the right.

Across from the post office is the new Fire Department building. Also a memorial to fallen comrades.  Also a piece of metal from the World Trade Center. 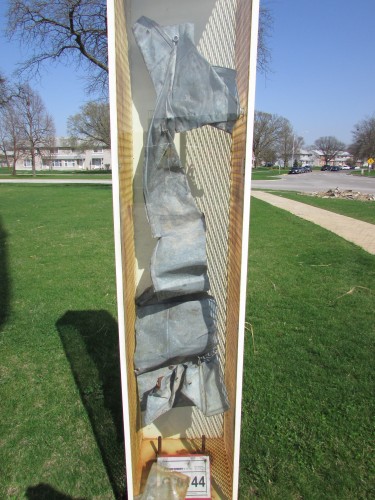 During my years there my family lived in two townhouses.   Homes are arranged in “courts”.  We visited my first court on Hemlock St. where I lived from birth to age 7.  We had to leave there because they were going to become condos, and they still are. 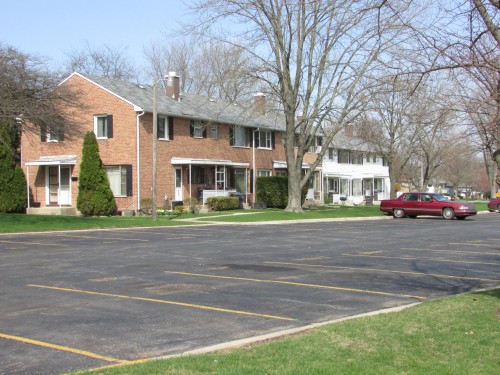 This the back of our former apartment, this is a merge from summer 1974 and from this visit. This is my little brother and I, love that Schwinn Pixie bike I had then. 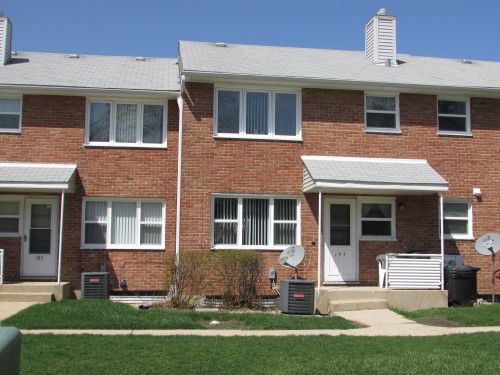 There are individual trees in this court that I liked even as a kid, they are still here!  Also much larger! 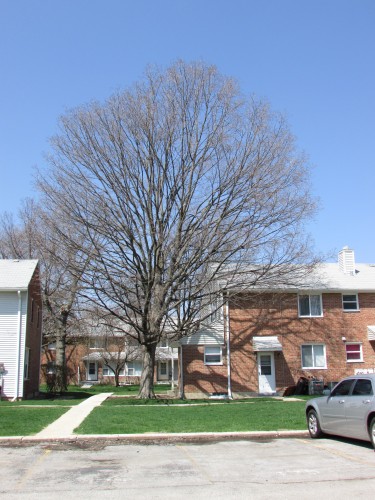 There are three red bud trees behind our former place, this is comparing 1986 and now. 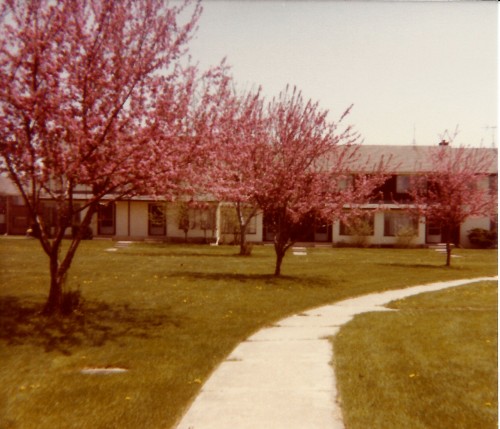 If you keep following the sidewalk, there once WAS a playground ahead. It is gone now.  Here is a picture I took of it in 1980. The same perspective NOW.

On the right side of the picture used to be a road that went next to the park, the road has been gone for more than a decade, but the remnant still exists.  The park would have been left of this view.

The white structure you see behind the town homes in the top picture is a former landmark of Park Forest, the Tower. It was right next to Western Ave, which leads to Chicago Heights. Here is a better picture of the same tower.  This was 1989.

In the middle of the former downtown was a slightly smaller version of this tower, but it had two clocks on it. Of course it was known as the Clock Tower.  It was the center of downtown when I lived there, and near it was (is) a stage for musicians to perform on summer nights.  Here is a newspaper clipping from 1977.  People playing frisbee on the lawn near the tower, this is classic Park Forest! the logo now and in the 1980’s.

Both of the towers are long gone, this sculpture is now in the approximate place of the clock tower.

This view is taken from the left side of the top picture, looking across.  On the right used to be a Marshall Fields.  The Marshall Fields building has since been torn down, this was my last photo pf the building. There is now a veteran’s memorial in the center of the picture. 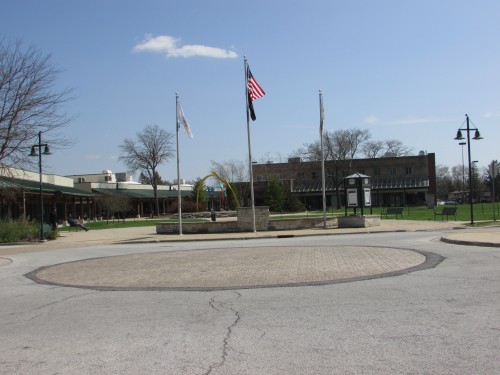 There are now two murals downtown.   This one is on the other side of the building on the left in above photo.  It is outside the building now occupied by the Tall Grass Arts Association (that used to be a Kresge’s). The second one is close to my Forest  Blvd. court.

Our visit is nearly over. Please be sure to visit the Park Forest 1950’s Museum, sponsored by the Park Forest Historical Society. It was not open the day we visited unfortunately 😦   The address WAS 141 Forest Blvd.  In 2016 it is at 227 Monee Road, inside St. Mary’s Catholic Church.

Right before leaving town, we stop by Thorn Creek Nature Preserve.  My Girl Scout troop went there a lot, a great day in a forest.

Another great attraction to visit is the new Rail Fan Park, opened July 28 of 2013. There is a viewing platform with a great view of a rail “clover leaf”, the only such rail juncture visible by the public. 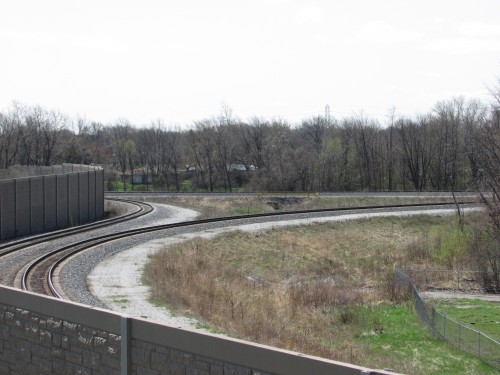 We made a full circle, not far from here is where we began our tour.  It was great coming back home to my hometown.

25 thoughts on “Coming Home to the Village of Park Forest”